“End-of-Life (EOL) preparation is a thread that ties us all together, no matter where you’re from; even when approaches might vary from country to country,” explained Cindy Safe who leads Coda Alliance’s International Program. “Every time I talk to people in other nations it feels like a common bond surfaces that just knocks down all the walls. ”

According to Ms. Safe, Coda’s well known Go Wish card game that eases people into EOL discussions began its international proliferation based on demand from physicians in the U.S. to translate the cards into Spanish. The effort would continue to focus on language translation. That is until members of Britain’s EOL preparation initiative when working with the cards, became concerned. They saw the whole effort in England shutting down unless the game was translated into British speaking English and aligned with the British culture.

It seems that in Britain the “American” language perceived as not serious; seen as a bit frivolous, could bring down efforts that Mary Matthiesen, author of “Dying To Make a Difference” and Director of Community Education and Engagement at Mission Hospice, along with the British and American teams worked on for years.

“When you’re talking about death and dying emotions go deep,” Ms. Safe continued. “And we wanted to make sure the British people responded to the cards. So, we worked on the translation keeping in mind what was acceptable to their culture and language. For example, the American title ‘Go Wish’ is now ‘The Conversation Game’ for our British cards.”

Following this insight Coda founder Elizabeth Menkin, M.D gave EOL medical teams in multiple nations the right to research the effect of the cards in other languages while benefitting Coda’s work. The team at first thought that that’s where the interest would continue to stay, in research efforts only. They were wrong! Go Wish proved to be so well-liked the idea of implementing them for other populations became contagious. It grew even stronger as Mary Matthiesen, invited to two major European health conferences, began to show the world how it all worked.

Great interest sprang up in worldwide health communities for multiple reasons. “It’s a niche market where not much else is available. At the same time, there’s a kind of consumer mismatch happening – a big marketing disparity. For example, our studies show that 80% of people wish to die at home but only 20% do so. The reality is that 80% of people will die in facilities regardless of what they truly want. All because no one asked them what they wish. Healthcare organizations haven’t yet come up with communications necessary to make people aware of these kinds of choices,” Ms. Safe explained. Yet death at home or just the ability to determine what you want at end of life, such as no heroic measures has been proven to save hospitals and their communities tremendous amounts of money.

Ms. Safe and the Coda team have worked with nations to ‘translate’ the cards for each language and each countries’ cultural acceptances. Some include:

“It’s really important to consider the nuances within each culture for every single card so translation takes quite a while. But we always find a friendly, collegial atmosphere in every country we work with,” she added. “For me, it’s so meaningful because I’ve seen how Go Wish builds bridges between people.” 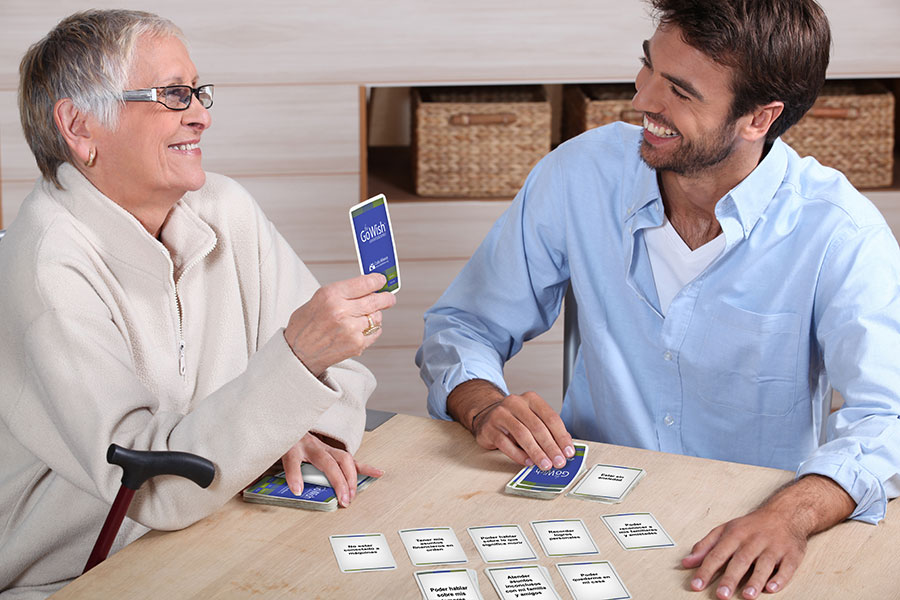